those are all in Afghanistan. they belong to the Taliban now.
Top 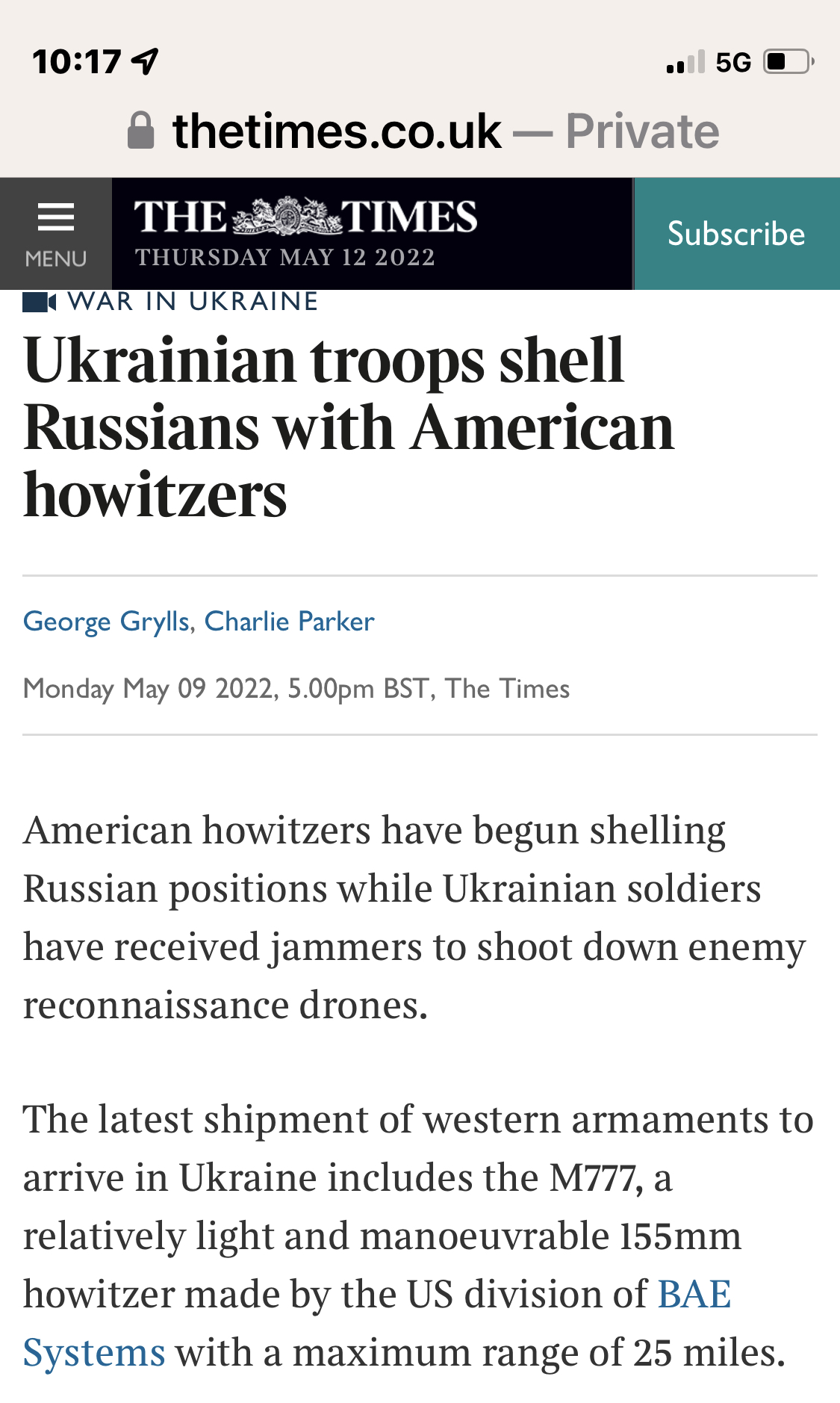 Nothing is True right now, but everything is possible.
Top

Also same story on CNN and Washington post. If The Times and these publications are all found to be bullshitting I imagine a lot of subscribers (including me) will be cancelling.

'Nothing is true' makes no sense to me.
Top

The article is true in as much as the current US administration (both parties) seem intent on using Ukraine as a proxy war with Putin/Russia, this is overtly signaled in our media regardless of political direction so the intent seems obvious.

Nothing is True in as much as just about every western media is now spreading as much propaganda to their own citzenry as for 'biased' information (the pro-Ukraine and Eu/US/etc stories are as--inflated/convolution/false/used/etc--as the anti-Russia/China/enemy stories are). In the US we legalized this in 2013. Therefore, everything you read is possible but nothing can be taken for true.

In the case of these stories, I imagine something more akin to Lord of War (for the motivation in arms trading) occurring on 'both sides', with some large % of the monies being sent via support 'disappearing' as part of the overall con game. Is war involved? Of course, the fog of war is what makes all of this possible! Well, that and gaming your own population(s) via politics.
Top

nothing is true on CNN or the Washington Post.

I’d take it as true that It follows that if Ukraine resistance is so strong as to hold of and even push back this invasion then that’s because of US and others weapons - so why would the Howitzer story in itself (I’m not talking about war coverage in general) be so implausible ?

If the Howitzer story is false, that would that also be enough for me to cast doubt on the evidence being collected and prosecuted in regards war crimes.

Should I instead be more likely to believe that all US Howitzers are now controlled by the Taliban and that the US has been incapable of manufacturing more since any taliban capturing of same ?

dante wrote: ↑Thu May 12, 2022 11:21 am
Should I instead be more likely to believe that all US Howitzers are now controlled by the Taliban and that the US has been incapable of manufacturing more since any taliban capturing of same ?

it's only 7 Billion Dollars of equipment left behind. heck, we print that in an instant and shift the debt to the children of children all the time.

as to CNN and Washington Post, there are so many examples of outright lies and misinformation from them, it makes sense that the new Orwellian department of information's leader likes to sing songs about "how to hide a little lie"(to the tune of supercalifragilistic, she's got a future in musical theater!). the most famous current example is that Hunter Biden's laptop with proof of strange doings in Ukraine is false news, although it is now confirmed as fact by the Bidens. she don't lie, she don't lie, she don't lie, cocaine(right Hunter?).

also, the Taliban did not capture equipment. it was left behind, along with both civilians and staff.

well, what do you expect? Putin is a gangster, and Zelenskyy is an actor who spent 10 years playing the president on TV and is known to be a beak packer. yay! clown-world would be funny if people weren't getting hurt....
Top

Hmm ok - I guess it'll take me a while to join the dots from all that to US Howitzers in Ukraine….
Top

Because the headline literally blames the "American Howitzers", in a manner similar to "SUV hits crowd" headlines. A few takeaways, first the depersonalization of the headlines when it's an incident that you don't want reflecting on one party or you need directed AT parties ('black man' can't be in headlines, so 'suv hits crowd' in that example was a common headline). Hence "American Howitzers", so the entire story is framed as america vs. russia with Ukraine proxy, and no mention of the actual people being used as pawns in these acts.

In any case, I suspect we'll be looping at this point.
Top

ww2 howitzers. they are available at any surplus auction.

(even funnier, i know a guy whose family runs a surplus store and they have a couple vietnam era howitzers, no explosives, of course)
Top

Cool. How many servicable M777’s does he have ?
Top

two earlier examples(m777s weren't used in Vietnam), but servicable is a tricky subject. it's just a big gun, but the first problem is ammunition. can't buy that at walmart. things like a firing pin or other mechanical items can be easily machined.

M777 are made in the UK, however. that means that they are not really "American" howitzers. you know that there are arms dealers who supply old kit like that to countries like Ukraine and India, right? i guess since final assembly is often in the USA, that you might call them "American". i doubt that Ukraine has newer examples with the latest targeting. the old fashioned ones work pretty well, anyway.

i haven't needed anything bigger than a 16ga shotgun or an old .44 magnum, myself.
Top

oh, but this is about whether or not they got some big guns from America? i'm sure they did, somehow.
Top

I don’t think they care about the age - they still like 100 year old machine guns !
Top

do the bullets kill?
Top

I hear we export a lot of 100+ year old problems that headlines can conveniently blame ourselves for, which again isn't to say that is 'not true'.
Top

The M1910 - high rate of fire being water cooled and gas triggered. It can kill.
Top
Post Reply
58 posts

Return to “Off Topic”